Following is the speech by the Secretary for Transport and Housing, Professor Anthony Cheung Bing-leung, at a business luncheon seminar for the Athens business community in Athens, Greece, today (June 6, Athens time):

Good afternoon. It gives me great pleasure to join you all here just before the opening of Posidonia 2016. First and foremost, I thank the Hellenic Federation of Enterprises for organising this luncheon, for the Hong Kong maritime delegation to meet with such a distinguished group of business leaders and professionals today.

Two years ago I similarly led a Hong Kong maritime delegation to come to Athens to participate in Posidonia 2014. A number of significant developments have taken place since then. Last year in September, Ms Sabrina Chao, who could not make it for this trip at the last minute, led a Hong Kong Shipowners Association delegation to call on Greek shipping counterparts to open up mutual business opportunities. Just two months ago, COSCO Pacific, part of the China COSCO Group and a Hong Kong listed company, entered into a formal agreement with the Greek Government to increase its investment in the Port of Piraeus to acquire a 67 per cent stake in the Piraeus Port Authority.

Indeed, the links between Greece and Hong Kong have been strong and growing. Greece is a growing trading partner of Hong Kong in Europe. Container throughput between the two places rose by 3.3 per cent over a year earlier.

In the past decade, there had been an obvious shift of international trade from the West to the East, to Asia and China in particular. Despite the sluggish global economic environment, Asia is still home to some of the world's faster growing economies, such as China, India and Myanmar. Its average GDP growth rate was 5.4 per cent in 2015. Over 30 per cent of the global trade volume arises from this region. It is a region buoyant of economic activities and should not be missed out.

With Asia, China has been the world's largest trading economy since 2013 with GDP of over US$10,800 billion. Its international trade value accounted for 12 per cent of the world total in 2015. The International Monetary Foundation forecasts that China's GDP will grow at an impressive 6.5 per cent on average per annum in the coming five years, much higher than the forecast growth at 2.3 per cent in the US and 1.9 per cent in the EU.

The expansion of China's international trade has generated huge demand for port and shipping services. In terms of container throughput, of the world's top 10 busiest container ports, seven are in China, including Hong Kong. China has been the largest shipbuilding economy in the world since 2010. The yearly gross tonnage of China-built ships amounted to about 40 million in 2015.

And there is more - China's Belt and Road Initiative. During the Han dynasty in Chinese history, the Silk Road defined the ancient network of trade routes connecting the West and East from China to the Mediterranean Sea. Today in the 21st century, the Chinese Government has lately launched a new development strategy drawing on this historical legacy: the Belt and Road Initiative, comprising the Silk Road Economic Belt and the 21st Century Maritime Silk Road, which together cover more than 60 countries in Asia, Europe and Africa. Trade links, capital flows, and infrastructural investment will be strengthened among economies along the Belt and Road corridors.

And Greece is very much part of this larger picture of mutual growth as it is an important gateway on the Asia-Europe trade routes. The revival of the Silk Road, both on land and at sea in the 21st century, presents immense opportunities for both Greece and Hong Kong as we contemplate closer co-operation. I understand there are plans for expanding the operation of Piraeus Port, and transforming the port into a transshipment hub for Asian products to Europe.

Hong Kong sits on the busiest international sea route and is strategically located at the doorstep of South China. We have a thriving world-class port which remains one of the busiest in the world, handling over 20 million TEUs in 2015, despite fierce competition from emerging ports in the region. There are about 340 container vessel sailings per week to around 470 destinations worldwide.

The Hong Kong International Airport operates over 1 100 flights per day, with regular and direct services to 190 destinations worldwide, including 50 destinations in the Mainland of China. Handling 4.38 million tonnes of cargo last year, it has been the world's number one cargo airport since 2010. When the Hong Kong-Zhuhai-Macao Bridge is completed and commissioned within a couple of years, Hong Kong will be much better connected to the booming western part of the Pearl River Delta region.

Our friends in Greece, if you aspire to extend your business operations to China and the Asia-Pacific region, Hong Kong is your trusted partner. We have a rich, century-long maritime heritage, and are now widely recognised as an international maritime centre and regional logistics hub. You will find doing business in Hong Kong congenial because we adopt international practices, our regulatory regimes are open and transparent, and we operate on a level-playing field for all. The rule of law is well entrenched and the business operating environment is stable, predictable and fair. With an independent judiciary practising common law, Hong Kong is a prime centre in Asia for providing shipping-related legal services and resolving maritime disputes by arbitration.

Under "one country, two systems", Hong Kong is uniquely distinct from other cities of China. We enjoy a high degree of autonomy with rights and freedoms enshrined in our Basic Law. Hong Kong has been ranked as the world's freest economy for 21 consecutive years by the US-based Heritage Foundation. We offer a business-friendly environment with a low and simple tax regime, as well as a simple business registration system.

At the same time, we benefit from being a Special Administrative Region of China. Under the Closer Economic Partnership Arrangement with the Mainland introduced 12 years ago, favourable trading and investment conditions are offered to all Hong Kong-based companies including foreign-owned ones, which enable them to gain preferential access to Mainland markets in various sectors such as logistics, freight forwarding, maritime and road transport, etc. So we have the best of both worlds.

Hong Kong is a global city and "super-connector" that mediates between Chinese and international business cultures. The autonomy, stability, internationality and credibility that Hong Kong enjoys make it an effective springboard for both Mainland maritime companies to "go global" as well as international companies seeking to access the huge China market.

The maritime community in Hong Kong is vibrant. We are home to a strong cluster of shipowners, owning and managing more than 2 100 ships, totalling some 150 million deadweight tonnage. And we have no shortage of expertise. Hong Kong has more than 800 maritime-related companies, providing a full range of professional maritime services, covering ship management, ship registration, broking and chartering, finance, marine insurance, maritime law and arbitration.

Before I conclude, please allow me to update you on an important milestone in Hong Kong's maritime sector. The Hong Kong Special Administrative Region Government has just established the Hong Kong Maritime and Port Board on April 1, to further drive the growth of high value-added and professional maritime services in Hong Kong and to foster related talent development. The Board will also help our industry grasp the many opportunities under the Belt and Road Initiative.

This visit to Greece is the first overseas visit undertaken by the Board after its formation. May today's friendly networking be the beginning of enhanced partnership between us, to make way for our smooth sailings. 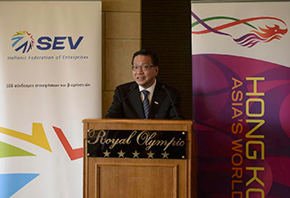