Following is the speech by the Secretary for Transport and Housing, Mr Frank Chan Fan, at the Hong Kong Container Terminal Operators Association Luncheon on April 20:

Jessie, distinguished guests, ladies and gentlemen,
Good afternoon. Let me first thank you all for offering me a lovely treat which is rather rare for me these days as I used to have lunch box for the past few months.

The Global Shipping Market
Today, I would like to share with you a few observations and thoughts on future prospect of our maritime and port industry from global and regional perspectives. As a matter of fact, sea transport has been dominating the international transportation and freight business. According to the Review of Maritime Transport 2017, over 80% of the global trade by volume and more than 70% of its value are carried by shipping, despite the rapid development of international air freight business.

The performance of maritime industry and international trade is highly interrelated. In the past decade, international shipping industry has experienced some challenges due to ups and downs in international trade caused by global economic uncertainties. Being a small open economy, Hong Kong’s shipping and port industry was also affected. The tide turns around in the past two years with positive signs in the international trade market. According to the World Trade Organisation, the international merchandise trade volume has increased from 1.3% in 2016 to over 3.6% last year, and the growth is expected to continue in 2018. The persistent recovery in global trade market and robust economic growth in Asia Pacific region has provided an impetus to the growth of the international shipping and port industry. The latest World Bank regional economic forecast predicts that Asia Pacific’s economic growth will reach 6.3% in 2018. To everyone of us here, this year we have all the reasons to be optimistic.

Regional Development
Behind the strong recovery of international trade, China is the major growth engine. In the past two decades, there has been an apparent shift of economic gravity from the West to the East, and the economic growth of China has accounted for one third of global growth. In 2017, China’s GDP has recorded 6.9% increase, mostly contributed by the acceleration of exports as global demand solidified. The strong economic growth in China has also boosted demand for imports, which spurred intra-Asia trade through regional supply chains. Such expansion in trade volume has generated huge business opportunities for port and shipping services in the region. Among the top ten busiest ports in the world, nine of them, including Hong Kong Port, are located in East Asia. Together with the implementation of national initiatives, namely the Belt and Road Initiative and the Great Bay Area Development, as well as the launch of major infrastructure such as the China-Europe Railway Express, massive business opportunities would be out there with free flow of cargoes, capital and people within and outside the region. International trade and demand are expected to be further bolstered, which would in turn benefit our port and maritime sector.

At the Boao Forum held last week, President Xi announced that China will further open up and liberalise the nation’s economy with easier market access, stronger intellectual property protection and lower tariffs in key sectors. Despite the latest China-US trade tension, with China’s firm commitment to free trade and globalization, a surge in international trade and investment in the region, particularly East Asia, will follow. Being the most internationalised city in the country and given our strong business ties with the Mainland, Hong Kong would undoubtedly benefit.

The Future Development of Hong Kong Port
Despite the very rosy and promising economic future ahead, we are not spared from competition from neighbouring cities. Our port sector would probably feel deeply on this, in face of the fierce challenges from Shenzhen and Guangzhou ports these years. Although our terminal charges are slightly higher than those of the Mainland ports, with our strategic location, excellent connectivity, high frequency and efficiency, many international lines are still calling Hong Kong Port. Today, our port is still the world’s fifth busiest in terms of cargo throughput, handled around 21 million TEUs last year.

International shipping is dynamic and ever-changing. To survive the test of time, we have to constantly equip ourselves to move ahead and stay competitive. One of the key developments besetting the container shipping industry is the use of digitalization and automation technology, to improve not only the efficiency of the port, but also the working environment and occupational safety of its staff. Major ports in the world are now becoming automated and Hong Kong is no exception. Earlier this year, the Kwai Tsing Container Terminal No.9 has launched the remote-controlled rubber-tyred gantry cranes and automated container stacking system. Automation has enabled operators to control the loading and unloading of containers in remote offices, without the need to climb up and down the crane cabins. Information technology also takes root in other processes. On this, I am delighted to learn that Hong Kong Container Terminal Operator Association has recently rolled out the Electronic Release Order, an initiative to adopt paperless processing of the release of laden containers at the terminals. With a view to improving supply chain efficiency thereby enhancing our port competitiveness, the Electronic Release Order is expected to be in full implementation by end-2019.

To cope with the increasing global trade, the use of ultra-large vessels is becoming commonplace. To reduce costs and achieve economy of scale, shipping companies are now ordering more ultra-large container vessels. Among the new container ships ordered worldwide in 2017, 18% (i.e. 20 out of a total of 109) were vessels with 18 000 TEUs or above, and the number is expected to grow further. To cater for the needs of the increasing use of ultra-large vessels, the Government has taken on board various initiatives to facilitate the trade. One of which is to dredge and deepen the Kwai Tsing Container Basin and its approach channel from a navigation depth of 15 metres to 17 metres. The project, which involved a total area of 428 hectares, has been substantially completed, and ultra-large container vessels can now access KTCT at all tides.

Apart from navigation depth, I understand that the industry has been expressing concerns on the air draft restriction of the Tsing Ma Bridge. Many vessels calling on multiple ports in the Pearl River Delta have to pass through the Ma Wan fairways, in order to get to Hong Kong Port. To allow more mega vessels to pass through the Bridge, the industry has been calling the Government to review the existing height clearance. On this, I must say that we take it seriously and will work with the sector to devise the most suitable solution on the premise that bridge safety and marine traffic safety are safeguarded.

Land supply is another limitation faced by our port sector. To sustain further development of the industry, the Government has implemented various measures, including making available six port back-up sites of about 18 hectares in the vicinity of KTCTs to expand the terminal yard space, to provide additional barge berths and to provide better support for port operators. We are working closely with relevant bureaux and departments in accelerating the implementation of these measures.

In closing, I would like to reiterate our strongest support and commitment to the port and maritime industry. We have not, and will not, lose sight of the sector. The Government is always ready to foster a closer partnership with the industry to seize the immense business opportunities and overcome the challenges, so as to further reinforce our position to serve as the region’s major transshipment hub and the world’s maritime centre in the years to come. Thank you very much. 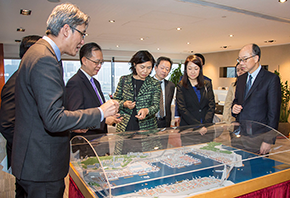 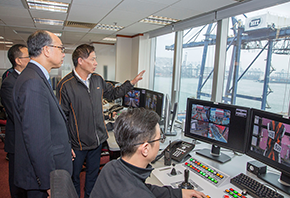 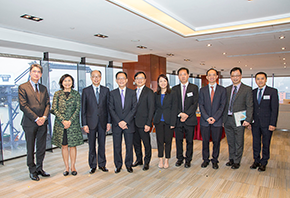