Speech by STH at seminar-cum-reception in Oslo, Norway (English only) (with photo)14 March, 2019Issued at HKT 8:00

Following is the speech by the Secretary for Transport and Housing and Chairman of the Hong Kong Maritime and Port Board (HKMPB), Mr Frank Chan Fan, at a seminar-cum-reception in Oslo, Norway, jointly organised by the HKMPB, the Hong Kong Trade Development Council, the Hong Kong Economic and Trade Office, London, and the Norway-Hong Kong Chamber of Commerce on March 13 (Oslo time):

Kung Hei Fat Choi! It is my great pleasure to join you all here in Oslo to celebrate the Chinese New Year. I wish you all good health, happiness and prosperity in the Year of the Pig.

Together with fellow members from the Hong Kong Maritime and Port Board, our visit to Norway seeks to foster closer partnership and collaboration between Norway and Hong Kong. Member States of the European Free Trade Association, with Norway being a key member, entered into a Free Trade Agreement (FTA) with Hong Kong as early as in 2011. The Agreement is Hong Kong's first FTA with the European economies. According to the latest data of the International Monetary Fund, Hong Kong was Norway's eleventh trading partner in Asia in 2016. I see much room for the two economies to work more closely to further enhance our bilateral relations, including shipping, as both of us have a long maritime history. Let me share with you some of the latest development in Hong Kong.

Hong Kong is among the top three international financial centres in the world, in good company with New York and London. The Washington-based Heritage Foundation has rated Hong Kong as the world's freest economy for 25 years consecutively. The World Bank also ranked Hong Kong as the fourth economy globally in terms of ease of doing business. No wonder over 8 700 overseas and Mainland companies have casted their vote of confidence by having their offices in Hong Kong. Major Norwegian maritime companies, such as DNV GL and Gard Protection and Indemnity Club, have rooted in Hong Kong for decades.

On transportation, maritime and logistics, Hong Kong is blessed with a strategic location enabling us to stay connected with the rest of the world. We can reach out to half the world's population in no more than five hours by air. The two major infrastructures commissioned last year, namely the Hong Kong Section of the Guangzhou-Shenzhen-Hong Kong Express Rail Link and the Hong Kong-Zhuhai-Macao Bridge, have further enhanced our connectivity with neighboring cities. Specifically, the Hong Kong-Zhuhai-Macao Bridge significantly reduces the transportation time of cargo movements between our container port and the western part of the Pearl River Delta from 3.5 hours to 75 minutes.

With these new cross-boundary infrastructures in place, Hong Kong is even more closely linked with Macao and the other nine cities in Guangdong Province, forming the Greater Bay Area. The Greater Bay Area, with a total population of about 70 million and a GDP of US$1.5 trillion, is going to become an international first-class bay area for living, working and travelling that will rival those of Tokyo and New York over time.

That brings me to another crucial foundation of Hong Kong, which is, the driving force from the economic development of the Mainland of China. Registering an average annual economic growth rate of almost 10 per cent in the past four decades, the International Monetary Fund predicted that China, whose GDP has soared to US$ 12 trillion, will continue to see a positive economic growth of over 6 per cent this year. In fact, China is Norway's largest trading partner in Asia, and I am pleased to learn that the two sides are engaging in productive discussion with the aim of inking a free trade deal.

Hong Kong is more than delighted to help deepen and broaden collaboration between Norway and China. Indeed, we are offering to play the roles of "facilitator" and "promoter" to support foreign enterprises, including the Norwegian maritime community, in doing business with China. Hong Kong enjoys the best of both worlds under the "One Country, Two Systems" principle. While Hong Kong is an integral part of China, our economic, legal and social systems are different from those of the Mainland. Having been engaging in business with the Mainland for decades, we are proficient in and well equipped with the language, the culture, the people and the way of doing business in the Mainland. Making full advantage of our international connections and experiences in the Mainland, we have played an irreplaceable role in China's economic success while benefitted significantly in many aspects.

With a strong foundation as an international maritime centre, we are well-equipped and well-placed to offer customised high value-added maritime services for global shipowners and shipping companies. Meanwhile, the Hong Kong Government is putting in place a package of initiatives to strengthen the maritime and port industries. Specifically, we are drawing up tax measures to boost ship leasing and marine insurance businesses, preparing for expanding the service network of the Hong Kong Shipping Register by setting-up regional desks by phases, and investing more in maritime training to build a competitive and sustainable pool of talents for the industry. With the enhanced supporting measures that we are working on, we welcome you to join us and look forward to an increased presence of Norwegian companies in Hong Kong soon.

Ladies and gentlemen, the beginning of 2019 is less gleaming as we would like it to be. The world has been clouded by the gloomy global economic prospect arising from the trade discord between the two largest economies, the unsuccessful nuclear summit between US and North Korea, the Brexit's rocky road, and many other uncertainties. Nevertheless, I am hopeful that with trust and partnership, opportunities ahead of us would outweigh the challenges that we are facing. With that, I wish you all an enjoyable evening. Thank you. 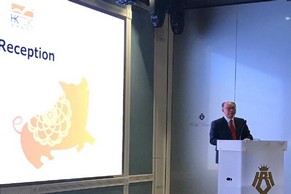