The delegation of the Hong Kong Maritime and Port Board (HKMPB) led by the Secretary for Transport and Housing, Mr Frank Chan Fan, continued their visit to Norway today (March 14, Oslo time).

In the morning, Mr Chan called on the Minister of Trade and Industry of Norway, Mr Torbjørn Røe Isaksen, to learn about the latest developments of Norway's maritime industry, promote Hong Kong's high value-added maritime services and exchange views on strengthening co-operation between the two places. Meanwhile, members of the delegation met with the Norwegian Shipowners Association to discuss global maritime issues of mutual interest and encourage the Norwegian maritime sector to leverage on Hong Kong's services to expand markets.

Mr Chan and the delegation then toured the Vision of the Fjords, a hybrid electric sightseeing vessel designed and built in Norway, to understand the development and application of technology of green shipping.

For the last stop in Oslo, Mr Chan and the delegation met with representatives from DNV GL, which is an international accredited classification society, to exchange views on the industry development prospects in respect of vessel safety, shipping equipment and technology.

Mr Chan and members of the delegation will depart for Bergen later today. 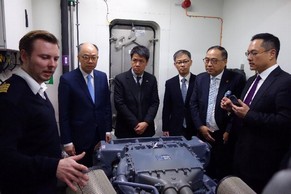