Following is the keynote speech by the Secretary for Transport and Housing and Chairman of the Hong Kong Maritime and Port Board, Mr Frank Chan Fan, at a plenary session of the London International Shipping Week Conference in London, the United Kingdom (the UK), today (September 12, London time):

Good morning. It's a pleasure to be here with you for the London International Shipping Week 2019.

International trade has become increasingly intertwined with the global economy and politics over the past year. The trade dispute between the United States (the US) and China, the likelihood of a no-deal Brexit, as well as the emerging trade tension between Japan and South Korea have all made the sea rougher than ever.

The World Trade Organization is vigilant of the negative impacts of escalating trade tensions. It has adjusted the projected growth of global trade volume downward repeatedly, initially from 4.4 per cent to 3.7 per cent, and further down to 2.6 per cent in April this year. This is an alarming signal to all of us.

As global cities, both London and Hong Kong are well established maritime services hubs, serving the international and Asian shipping communities respectively. Both of us are facing the common challenge of rising protectionism. It is therefore important for us to identify new markets and new businesses to weather the storms.

As a matter of fact, the powerhouse of international trade has gradually shifted to the east. Asia has recorded the highest regional growth in the past decade. Its share of world exports rose from 28 per cent in 2008 to 34 per cent in 2018. Despite the economic headwind, the total export volume of Asia is projected to grow by 3.7 per cent this year, and stays ahead of the global average. To date, nine of the top 10 container ports worldwide are situated in Asia, and seven of them are in China including Hong Kong.

Over the past two decades, trade and economic relations between the UK and China have strengthened remarkably. As of today, China is the UK's 5th largest export market and 4th largest source of imports. Hong Kong is also the UK's 9th largest trading partner outside the European Union. Bilateral trade between Hong Kong and the UK increased by almost 15 per cent from 2017 to 2018. The economic ties among the UK, China and Hong Kong will only be more robust in future, particularly with the impetus of China's national strategy, namely, the Belt and Road Initiative, which opens a host of opportunities for all of us in the global maritime community.

China's Belt and Road Initiative offers immense opportunities for a wide array of sectors, including maritime. The land-based Silk Road Economic Belt and the ocean-going 21st Century Maritime Silk Road cover some 140 countries. The changes brought about by the Maritime Silk Road are unprecedented and far-reaching. There are more than 50 countries taking part in the Maritime Silk Road. Many of them are in South-east Asia, South Asia, the Middle East and Northern and Central Africa, with vast potentials in establishing and enhancing their port, logistics and maritime infrastructure and business. In the first half of 2019, China's trade with these countries has reached US$280.1 billion, an increase of 18 per cent in five years' time.

The Maritime Silk Road has enabled better market access to Europe and the US which resulted in busier traffic along the Suez Canal for container shipping. The increased trade flows in the region have attracted more investment in port infrastructure across regions. Container terminals have strived to increase their capacities for handling larger vessels. Demands for services of ship management, marine insurance, dispute resolutions and port operation will grow in tandem.

While new regulatory requirements often entail compliance implications, they also open up new opportunities. As an example, the need for new vessels to comply with various new standards on green shipping and eco-friendly vessels is expected to generate rising demand for ship finance. According to the report of the United Nations Conference on Trade and Development (UNCTAD), the capital expenditure required for building new vessels amounts to approximately US$80 to US$100 billion every year.

On another front, technological advancement in the shipping industry is both exciting and challenging. It is exciting because no one would have ever imagined hundreds of years ago, that an automated ship could navigate in the sea unmanned. It is also challenging because such mode of operation brings about uncertainties that call for new insurance policy coverage. While disruptive technologies such as blockchain, digitalisation and data analytics are shaping the business model of the international carriers and port operators, possible disputes among industry players would give rise to the demand for swift, direct and well-trusted maritime arbitration services too.

Clearly, professional maritime services will be the new engine of growth for maritime centres like London and Hong Kong. There are ample common grounds between London and Hong Kong, and we are keen to foster closer collaboration than ever. Our collaboration began in 2017 when the Hong Kong Maritime and Port Board signed the Memorandum of Understanding with Maritime London. Last year, we jointly organised the "Hong Kong-London Maritime Day" during the Hong Kong Maritime Week where maritime professionals gathered and discussed the prospects and challenges facing the industry. Today, we are here in London again to reciprocate and forge even closer ties with our UK counterparts.

On ship finance, we are drawing up tax incentives to boost ship leasing business. According to the UNCTAD, over 90 per cent of shipbuilding activities take place in Asia, particularly the Mainland China, Japan and South Korea. Ship leasing, emerging as a new business model, is gaining momentum in the international maritime community. As a leading world financial centre in good company with London and New York, Hong Kong is a clear choice for shipowners and ship finance companies to establish presence and expand operations. On this, I am glad to share that the International Chamber of Shipping has decided to set up its first Asia office in Hong Kong in November this year.

As one of the major insurance hubs in the world alongside with London and a few other cities, we offer a full range of maritime insurance services. The fact that the International Union of Marine Insurance has established permanent presence in Hong Kong as its first-ever overseas hub speaks for itself. Our plan to provide 50 per cent profits tax concessions to the business and licensed insurance brokers will prove to be attractive to those from the sector.

The Hong Kong Shipping Registry is the 4th largest shipping register in the world. On top of its excellent fleet quality, our Shipping Registry goes the extra mile to serve our shipowners. We are setting up regional desks by phases in selected locations across the globe to provide more direct and prompt support to shipowners. London is one of the first few regional desks to be in operation by early next year, alongside Shanghai and Singapore.

When it comes to facilitating and promoting business between East and West, Hong Kong has more to offer. Under "One Country, Two Systems", Hong Kong is your gateway to the Mainland of China.

Ladies and gentlemen, Hong Kong is an international metropolis that is always responsive to changes. For those who are eager to tap into the Chinese and Belt and Road markets, Hong Kong offers the know-how and provides the market access. Amidst the challenges posed by trade tensions and regulatory changes, both London and Hong Kong are very well positioned for the new opportunities ahead.

Before closing, I would like to update you on the latest development in Hong Kong. Many of you may have learnt about the situation in Hong Kong since June. While people of Hong Kong are holding diverging views on political issues, the majority of people taking part in processions do so in a peaceful and orderly manner. Although some processions attracted large crowds, it remains safe to travel to Hong Kong. Hong Kong still stacks up very well and remains a highly competitive global trade and maritime hub. In fact, the Government has agreed to withdraw the extradition bill and we have confidence in stopping violence through the rule of law, as well as in healing the society through cross-sector dialogues with our fellow citizens.

Last but not least, may I wish you all an enlightening and fruitful discussion today. Thank you. 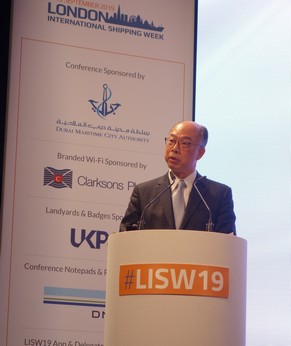 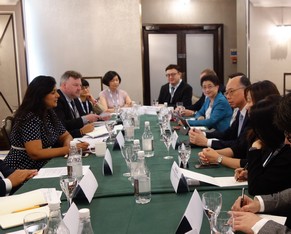